Fires are ravaging the Amazon rainforest in Brazil. Moreover, Amazon forest provides almost 20% of world’s oxygen. And its blazing affects climate change and global warming. Forest fires are common in the Amazon during the dry season, from July to October. Nturally occurring events can cause these fires. But  farmers and loggers clearing land for crops or grazing can also cause the fires. The fires are emitting large amounts of smoke and carbon. According to Cams,  the smoke has been travelling as far as the Atlantic coast. 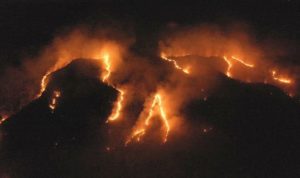 The fires have been releasing a large amount of carbon dioxide, the equivalent of 228 megatonnes so far this year. The Amazon basin is home to about three million species of plants and animals, and one million indigenous people. Moreover, the forest  absorbs millions of tonnes of carbon emissions every year. But when trees are cut or burned,the rainforest’s capacity to absorb carbon emissions is reduced. IPAM states that the recent increase in the number of fires in the Amazon is directly related to deliberate deforestation. Furthermore, Deforestation in July 2019 was 278% higher than in July 2018.