The US has announced plans to send forces to Saudi Arabia in the wake of attacks against the country’s oil infrastructure.

Secretary of Defense Mark Esper told reporters the deployment would be “defensive in nature”. Total troop numbers have not yet been decided.

Yemen’s Iran-backed Houthi rebels have said they were behind the attacks against two oil facilities last week.

But the US and Saudi Arabia have both blamed Iran itself.

“I think the strong person approach, and the thing that does show strength, would be showing a little bit of restraint,” he told reporters in the Oval Office.

The fresh sanctions, which Mr Trump described as “highest level”, will focus on Iran’s central bank and its sovereign wealth fund.

What did the Pentagon say?

He said the US forces would focus on boosting air and missile defences and would “accelerate the delivery of military equipment” to both nations. 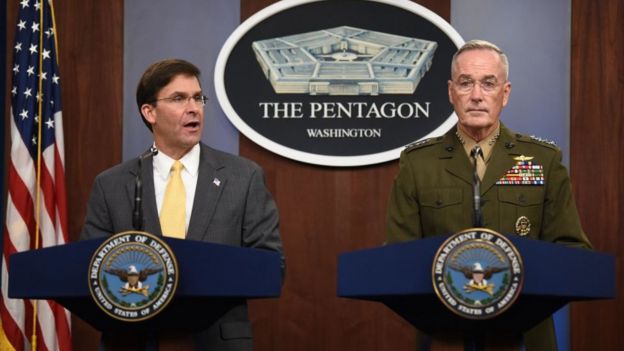 Chairman of Joint Chiefs of Staff Gen Joseph Dunford called the deployment “moderate” and said it would not number in the thousands. He gave no further details about the type of forces that would be sent.

According to The New York Times, when reporters asked Mr Esper if military strikes on Iran were still being considered, the defence secretary responded: “That’s not where we are right now.”

What happened in Saudi Arabia?

Strikes hit the Abqaiq oil facility and the Khurais oil field in Saudi Arabia a week ago, affecting the global oil supply.

On Wednesday, the kingdom’s defence ministry showed off what it said were the remains of drones and cruise missiles proving Iranian involvement. The country was still “working to know exactly the launch point”, a spokesman said.

The US has also said Iran was responsible. Senior officials have told US media outlets they had evidence the attacks originated in the south of Iran.

Iran has repeatedly denied any role in the strikes, with President Hassan Rouhani calling the attacks a reciprocal act by the “Yemeni people”.

“US is in denial if it thinks that Yemeni victims of 4.5 yrs of the worst war crimes wouldn’t do all to strike back,” Iran’s Foreign Minister Mohammad Javad Zarif tweeted.

On Wednesday, Secretary of State Mike Pompeo called the strikes “an act of war”.

Mr Zarif warned on Twitter that Iran had no desire for war but “we will not hesitate to defend ourselves”.

US plugging a defensive gap

The multiple drone and missile attacks on Saudi Arabia’s oil installations have exposed a major gap in its defences. Now the US, its strategic ally, has offered to help plug that gap.

A US Navy destroyer is being stationed in the northern Gulf to intercept any missiles coming from that direction. The Pentagon has also announced a further deployment of troops to Saudi Arabia to help the country bolster its anti-missile defences.

Further US defensive equipment is being sent to both Saudi Arabia and the United Arab Emirates amid the ongoing tensions with their neighbour, Iran.

But the basing of US forces in Saudi Arabia has been controversial in the past.

Even though they were invited in by the Saudi King, their presence was used by Osama Bin Laden as a rallying call to jihadists to resist what he called a Crusader invasion of the Arabian Peninsula.